Twenty-five years ago this Sunday the East German government made a surprising announcement. It would do what its citizens and the Western world had been demanding for years. It would tear down the Berlin Wall.

For 38 years the wall had stood as a literal and figurative barrier between the communist-controlled East and democratic West, a real-life Iron Curtain blocking passage into and out of that forsaken land. Its destruction really did bring freedom and, in time, greater prosperity to a people that had become virtually accustomed to living without it. And the eventual collapse of an empire, rendering an ideology to the ash heap of history. Three cheers for democracy.

A final word for those interested, and a question often raised by my students (many of whom were born post-1989… ouch). Just as the entire wall was not built in a day it was not torn down in a day either. What happened on November 9, 1989, was the announcement that East German citizens could now pass through the wall to West Germany and West Berlin. The citizens took it upon themselves at that point to literally bring down the wall, though the process was not actually completed by the state-run bulldozers until 1992. The final sorry example of crappy government service at work.

New York–Paul Pierce and Garrett Temple each scored 17 points, and the Washington Wizards used a 32-15 third quarter to defeat the New York Knicks Tuesday night at Madison Square Garden. In other news, the Republican Party regained control of the U.S. Senate and picked up major gains in Congress and statehouses across the country.

That’s how I felt last night watching Election Night “coverage” on several different channels, numbers rolling across the bottom of the screen with sports scores and the occasional pop culture tag. If politics is but a horserace to win, place, or show I’m going to start referring to it as such. I just wish I didn’t have to pay those idiots.

No doubt I would be pleased to see some actual policy changes and/or initiatives from Washington in the next two years, but I’m not holding my breath. These guys are comfortable being in the minority and they’re going to act as much even when they’re not.

At least we can all celebrate one victory last night. Goodbye, annoying mailers and TV commercials. This is the day the politicians begin to leave us alone for 10 minutes before the next election.

Update: 7:32 a.m. E-mail received encouraging me to purchase 2014 Republican victory souvenir t-shirt. Thanks for ruining my last point and validating everything that preceded it.

It’s hard to pinpoint an exact date on which a nation lost its soul, but if forced to do so I would select November 3, 1964. This was the ill-fated day of the 1964 presidential election, when Lyndon Johnson defeated Barry Goldwater, thus killing small-government conservatism forever. Never had Americans had such a choice and such an opportunity, and never have they thrown it away with such vigor. Oh sure, there are glimpses now and then, but nothing like the deathblow dealt fifty years ago today.

I realize the blog is becoming something like what-anniversary-can-we-celebrate-today trivia, but this, like the others is of great importance. In fact, the entire month of October 1964 is something to examine, and I’m ashamed I didn’t do so until today. It was done quite well 20 years ago by David Halberstam in a book cleverly titled October 1964, and I recommend that one highly. Focusing on both baseball and politics, Halberstam examines the changing tides imminent in that month, and in 2014 they are even more clear. And I still think no election was more important.

Goldwater spent the rest of his career pushing small-government initiatives, the kind of thing one can do as a minority-party senator. Does this describe the so-called Tea Party of today? Well, after tomorrow they might not be in the minority. 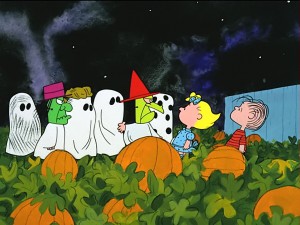 Is it too cliche to be Madison Bumgarner for Halloween this year? I’d like to think I could get away with it. After all, who called his Game Five performance something resembling Muhammad Ali? Well, Game Seven matched it. Remember, stars shine when the lights are brightest.

Today, of course, is Halloween, one of my favorite holidays. This is my son’s first, and my ninth without the master of all things Halloween. So here’s to Bart Simpson, Michael Myers, Roseanne Conner, Charlie Brown, and everyone who makes Halloween special..

I’ve received flak from two disparate sources the last 48 hours re: Monday’s post. One, that I would compare a single baseball game to the greatest boxing match of all time. I stand by the analogy. Memorable performance with the whole world watching.

And speaking of such performances, I was gently reminded (chided?) that I neglected to mention the anniversary of another October 1974 event: Frank Sinatra’s performance at Madison Square Garden on October 13, 1974. Billed as the “Main Event,” Sinatra was broadcasted live to the entire Western Hemisphere, an honor rare in the pre-Internet era. Presided over by none other than Howard Cosell, the show truly had the feel of a championship fight.

So tonight, with the whole world watching, which stars will shine brightest in Game Seven of the 2014 Fall Classic? Tune in to find out.

Madison Bumgarner’s pitching performance in last night’s Game Five of the World Series deserves the word epic, an epithet used all too often by tweens and Tweeters in 2014, but completely apropos in its traditional meaning here.

Last night’s contest wasn’t exactly a rumble in the jungle (more like play by the bay), but the gutty performance did call to mind the work of a certain Mr. Ali, who 40 years ago this week defeated a certain Mr. Foreman in what some consider the greatest boxing match, nay, greatest sporting event of the 20th century.

On October 30, 1974 (at 4 a.m. local time to accommodate Western TV audiences), Muhammad Ali knocked out George Foreman in Kinshasa, Zaire: a nation that no longer exists on a continent known today only by the fact that some people there carry the Ebola virus. The match was a culmination of what turned out to be a month-long celebration of music, sports, and black culture that would be unrecognizable today. And entirely politically incorrect. Well, maybe.

For a nostalgic look at this event watch the Oscar-winning documentary When We Were Kings, now 18 years old but still relevant and still awesome today. You’ll thank me later.

Squeamishness and apologies for conservative thought has already begun for 2016 among our own. As I often find myself saying, “With Republicans like these…”

The stage was set: two deserving teams from deserving cities, meeting at this most worthy park, denied of World Series glory for 29 years.

If Tuesday’s game was any indication, it’ll be 30.

Game One never really found the drama and intrigue found in nearly every other playoff game this year, and America’s new darlings, the Kansas City Royals, lost for the first time in weeks. Yup, those were the Royals I grew up with.

Kudos, though, for Fox’s coverage of the game. Even a bad game will sound good when called by Joe Buck, Harold Reynolds, and Tom Verducci. Yeah, those guys cane together, and unlike most modern broadcasts, the graphics weren’t overdone.

Notre Dame, Notre Dame, you’ve done it to me again. The Irish, the last 25 years in marquee match-ups like Saturday’s instant classic with Florida State, have begun to look a little like Lucy holding the football for Charlie Brown.

And for 25 years, I’ve been Charlie Brown.

Travis Ishikawa’s walk-off home run last night capped off one of the greatest two weeks of baseball games I have ever seen. The thunderous applause at AT&T Park, though, may have drowned out the sobs of Fox studio executives, left with no product until Tuesday and a World Series featuring the media captials of San Francisco and Kansas City. Oops.

Regardless of market share or ratings or anything else I don’t particularly care about, I plan for this World Series to be one of the best in memory. Simple fact: you’ve got two really good teams, and they play as teams. For all the great games this postseason, clutch performances and exciting finishes, there has really yet to be a good series, amazing as that is. I hope that changes beginning next Tuesday, and for baseball’s sake (if not Fox’s) I hope Americans turn on their sets and get excited about the national pastime. Hell, we even got amped up about soccer for a few weeks this past summer; I think we can do it for the game we actually play well.

My prediction: I will get very little work done and very little sleep every day next week.