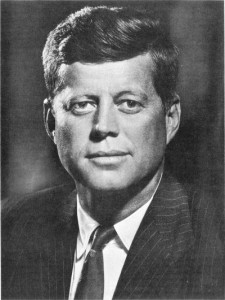 Today, of course, is a sad anniversary in American history: the assassination of President John F. Kennedy. They say everyone alive at the time remembers where he was when he or she first heard the news. Every time I see statistics now about how people heard the news I’m always surprised. Most people didn’t hear the news from Walter Cronkite or their local news reporter, but from friends or neighbors or coworkers who called or told them in person. Amazing that even in the pre-Twitter, pre-Facebook era, most people were already on a 24-hours news cycle, and relied on an old-school “social media” to get their news. Let’s hope we never have to find out what chaos would strike the blogosphere should such an event ever occur again. If Miley Cyrus can bring Twitter to a standstill, I’d hate to think what real news could do.

The Kennedys still remain a fascination to us 50 years after JFK’s death, the subjects of books, movies, and of course, blog posts. I count myself among Kennedy watchers (as I am with many historical figures), and will watch this weekend’s tributes with interest. I usually say that I like everything about the Kennedys… except their politics. And with everything I’ve read and heard about that fateful November day in Dallas (and, like today, it was a Friday), I think Oswald was the only shooter present. I would not be altogether surprised to discover, some day, that Oswald indeed discussed the shooting with associates boardering on co-conspirators, but it seems as though ultimate responsibility lies with Oswald himself. I love a good conspiracy as much as the next guy, but I just don’t see it here.

That said, remember today that life is short, and one never knows how or when it will end. Spend time with your family and friends, and remember that sometimes life can be so enjoyable.