No matter who you are, where you live, or what holiday you celebrate, chances are you have some December tradition you like to uphold. No, must uphold. They’re not optional. These are things you must do or your chosen holiday does not really come. I’ve written about this before, citing particular movies, songs, and TV specials that must be listened to or viewed, but I’ve never posted a comprehensive list of all things that must be seen, heard, eaten, or experienced between Thanksgiving and Christmas. They are in no particular order unless otherwise noted, beginning with two I mentioned Friday in the preview of this post. Whether this is all of them I’m not really sure, but here’s the first 50 I could think of.

Things to do between Thanksgiving and Christmas

1. Listen to Frank Sinatra’s A Jolly Christmas from Frank Sinatra. Recorded in 1957, it set the bar high for holiday albums. Preferably listened to on long-playing record, where one can easily note the change in mood from contemporary (side one) to traditional (side two), I like to listen to this album in its entirety late on Thanksgiving evening. (Alternate listening time: car ride home from Grandma’s the following day.)

2. Put up Christmas lights in the den. Nothing looks better than the glow of your television backlit by multi-colored bulbs.

And speaking of your television, hear are a few things to watch (numbers 3-13 on our list)…

Then there are movies. Oh, the many movies of Christmas. These are my Top Five (and numbers 14-18 here).

20. Coca-Cola (the beverage of Christmas)

22. those white nougat candies with the tree image in the center

23. those cheap shortbread cookies that are dyed pink or green and are surprisingly delicious, not to be confused with the ones that come in the blue tins

25. a chocolate orange (why do they not sell these all year?!)

26. chocolate bar wrapped to look like a hundred-dollar bill (same question as above)

30. Vince Guaraldi Trio’s A Charlie Brown Christmas (1965) listened to in its entirety

Other things to see, hear, taste, read, do, or experience…

34. Walk through the “Winter Walk of Lights” at Meadowlark Botanical Gardens (Vienna, Va.).

35. Drive through the Bull Run Festival of Lights (Centreville, Va.), amazingly even better than the walk-through at Meadowlark, seen from the comfort of your car.

36. See a performance of The Nutcracker, or at least listen to the “soundtrack” in its entirety.

37. Enjoy an evening at home watching that yule log image on your television.

39. Find a Christmas party at someone’s house (preferably way nicer than your own house) and go there. Bonus points if you’re playing the piano and getting paid to be there.

40. Have Jack Daniel’s on Sinatra’s birthday (December 12). This really has nothing to do with Christmas but it does fall in the season. You should have Jack Daniel’s from time to time anyway just to be reminded of what a real drink tastes like, before the world was overrun by girly cocktails and macchiatos with skim milk.

42. Deposit money in one of those Salvation Army red kettles.

43. Rite Aid in Sterling; why their set up is better than everyone else’s I couldn’t say, but it is.

44. The mall. Every community has a place simply referred to as “the mall.” Go there and experience the true meaning of Christmas.

45. A giant decorated tree in a shopping plaza (again, everyone has one… or in Loudoun County we have about a dozen).

And finally, everyone has his or her own unique Christmas toys or games that have special meaning. Make these your last three. For me I have two from my childhood and one from adulthood.

48. The mouse Advent calendar. Back before Advent calendars were ubiquitous (and could set you back 20, 50, or 100 bucks depending how adult you wanted them to be), I had a simple cloth calendar that hung on my bedroom door. There were 24 pockets, and each day a little toy mouse moved from pouch to pouch, producing a toy, money, or treat each day. I’ve now given Franklin the calendar and he’s brought the tradition into the 21st century. I’m also on the third generation of cats who like to steal that little mouse.

49. The dancing Coca-Cola bear. Purchased in about 1993, this item always makes me smile. It’s a stuffed bear, about a foot tall, holding an upright bass and wearing sunglasses. It sits on a pedestal adorned with the Coca-Cola label, and dances to a medley of “Jingle Bells” and “I’d Like to Teach the World to Sing.”

50. Also from the world of Coke memorabilia… a Holiday 2005 glass bottle which sits on my bookshelf 12 months a year. The beverage was consumed more than a dozen years ago but the bottle looks like it just came off the factory line. It was the last thing my father ever gave me. (Well, last physical thing.)

Number 51, of course, is to let Christmas come and enjoy the day.

But isn’t the buildup so much better?

It’s the day after Thanksgiving. Step #1: put up Christmas lights in the den. Step #2: cue up A Jolly Christmas from Frank Sinatra and listen to said album in its entirety.

Coming Monday… 48 more things one must do between Thanksgiving and Christmas.

I’ll admit it. I think Thanksgiving is kind of a b.s. holiday. Heresy, I know, but it’s true. At their heart all holidays are kind of pointless though, no?

I’ll take it, though. I’ll certainly take it. I’ve been known to celebrate Tuesday for Pete’s sake, so I can do this one.

You take what you can get, always.

And be thankful for it.

Okay, it wasn’t the prettiest win of all time, but when something goes right around here you celebrate it. My hometown NFL club, the Washington (expletive), emerged victorious for only the second time this season, and the first time in more than a year at home. Their “plus/minus” number improved by plus three (to negative 125), and now Washingtonians can enjoy this Thanksgiving talking about the local team’s “winning streak.”

In other news… Bengals watch: minus six today, bringing them to negative 135 on the season. We got this one in the bag, boys!

Word on the street is that Jeopardy! will air a “greatest of all time” tournament in January, the winner to take home $1 million. Participants will be the three players who’ve won the greatest amount of cash in the show’s history: Ken Jennings, Brad Rutter, and James Holzhauer.

Whoa. That’s murderer’s row. What a time to wish you still had “TV.” (TV? That old thing?)

Let the record show these gentlemen have already taken Jeopardy! for $10.7 million, but this is totally not about the money. This is war, and the combatants worthy of such a distinction. It’s sort of beyond anything we see in the “regular” sports, which have championship contests every season. This is, perhaps, a once-in-a-lifetime event, akin to a heavyweight title bout or Elvis television special.

This is the kind of thing I would totally buy on pay-per-view.

Think about it, Jeopardy!

Remember when in 2018 Dunkin’ Donuts (some places just call it “Dunkin'”), “as part of our commitment to serve both the planet and people responsibly… announced plans to eliminate all polystyrene foam cups in our global supply chain with a targeted completion date of 2020”?

Yeah, neither do I, but apparently it was a thing.

Fear not, friends. Soon DD will serve you your coffee in a “double-walled paper cup made with paperboard certified by the Sustainable Forestry Initiative Standard.” I swear I’m not making this up.

When I was a kid there were two things very different about Dunkin’ Donuts. One was that they sold coffee. For like 35 cents. Not peppermint mocha hot macchiatos with skim milk for $8.95. (And don’t even get me started on veggie egg white wraps with fake meat patties.)

The second is that they gave you your coffee in an actual coffee mug. Like, a ceramic one with a handle. You could sit at a counter or one of their booths and enjoy your wares while served by an actual waitress.

She asked you whether you wanted decaf or regular.

Not foam or paperboard.

One of the ways I demonstrate negative numbers to my students is to have them compute “plus/minus” numbers. As in, points scored (plus) and points scored against (minus). Obviously you want a big “plus” number, and the good teams have it. Bad teams have a “big” minus number. (Only the absolute value is big, kids; the numbers actually get smaller and smaller as you subtract.)

My hometown NFL team this season has scored, in total, 125 points in 10 games. That’s pretty awful. Worse is that they’ve given up 253.

Not the worst, however.

The Cincinnati Bengals (one of the worst franchises in sports history) this year have scored 147 points and given up 276.

(This is tomorrow’s bellringer, by the way.)

So my local team is still not the worst. 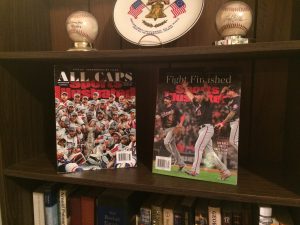 I think the definition of a spoiled childhood is growing up having really nice things. These two objets d’art look rather beautiful, no? D.C. kids today are so spoiled.

I had high hopes for Harry Connick Jr.’s new album, True Love: A Celebration of Cole Porter. After all, not many singers around today (read: people who are still alive) know who Cole Porter is, or can give his songbook the respect it deserves. Harry’s one of them, and still has the youthful cool cred to enlighten a 21st-century crowd.

Accompanying the album is a return to Broadway for Mr. Connick, a two-time Tony nominee though absent from the Great White Way since 2011. He’ll have his own show at the Nederlander Theatre in December featuring songs (and the orchestra!) from True Love.

Something tells me the show will be great. I’ve seen Harry perform a few times live and he is electric.

His studio album? Eh. Better than your average singer doing Sinatra karaoke (it’s hard not to hear it as that). It’s the music that’s great. Harry’s got enough respect in the music business that the best session players in the world want to record with him, so you can bet his bandmates are the cream of our top-flight music schools. And just as important… Harry can afford them. (When you play for the Yankees you expect to get paid.)

Guess I’ll have to see the show.

Many times I have lamented the fact that Veterans Day no longer gets the respect it deserves. After all, it used to be a  holiday, right? As in… no school. What happened? (Think about it–Columbus Day is way more controversial and we’ve still got that one.)

Well, it may not be as bad we think.

Last Friday at my son’s school there was in fact a Veterans Day program, and there are further festivities planned today. At schools across the nation (mine included), veterans are being honored with students actually in school, learning about Veterans Day rather than sitting home watching other people play video games on the Internet (or whatever kids “do” these days).

I like it. I like it, America. And whatever the reason, whatever the season, we at mikeoconnelljr.com (that’s me) salute American veterans and those serving all over the world. Every day.