Over the weekend I got to visit the President Woodrow Wilson House (www.woodrowwilsonhouse.org) in Northwest D.C. Story goes that Wilson really is the only president to stay in Washington after his term in office, though he died only three years after doing so. Mrs. Wilson lived in the house until 1961, after which she bequeathed the house and its furnishings to the National Trust for Historic Preservation. (Somebody had obviously taken the good stuff, though. I looked through the pantry and all the boxes were fake.)

I’m sure Mrs. Wilson got a pretty good tax advantage for turning the house into a museum, though she probably wishes her heirs could sell the place today. It’s located on S Street along a swanky strip of mostly foreign embassies and other “non-profit” shelters. (Did I say shelter?)

When the Wilsons bought the place I’m pretty sure they didn’t know Washington real estate would be what it is today. Actually, no, they probably did. Many historians now look to Wilson as the first president to bring the kind of money and power to D.C. which later executives took for granted.

It’s sure not the swamp they built the place on.

Or maybe it still is.

As of 6:51 a.m. EDT tomorrow, summer officially begins. Basketball’s over, hockey’s over, and school’s out for, well, you know. From here on in it’s baseball and barbecues, and playing outside even after it’s dark. ‘Tis the season!

For eight years after graduating I waited for my alma mater to offer a doctoral program in public affairs. Well, several more years down the line it finally did, a little too late for yours truly. Here’s a snippet from the article announcing such in my recently received alumni magazine:

“We will prepare graduates to enter a community of scholars who can conduct rigorous research, advance knowledge and theories, and design theoretically sound and effective programs that engage issues of diversity, social justice and power.”

Yikes. Looks like I got out just in time!

‘Round these parts, today is the first real day of summer vacation (weekends don’t count). Summer vacation doesn’t mean as much when you’re an adult, does it? Growing up with two parents who were schoolteachers I was 18 before I realized that 97% of people have to work all year round. Bummer.

I guess summer doesn’t really mean as much for kids today either, what with Facebook, Twitter, and endless summer camps, our youngest generation is the least disconnected of all. So much for vacation.

I neglected to mention the other day that I did receive a birthday card from my House of Delegates member, David Ramadan. You know, just David saying hello. Uh huh. My representative, a “Republican,” from the oldest standing legislative body in the New World. This guy out Tom Libouses Tom Libous. Thanks, Dave. I hope you’ll forgive me if I do not reciprocate.

There are few things that make me so smugly happy in the morning than reading about a nice, fat defeat for the Republican establishment. Nice job, Virginia! And for God’s sake, keep up the good work.

Obviously birthdays mean more when you’re a kid, but I’ve spent the last decade and a half trying to reverse that trend. A birthday’s a birthday, and should be celebrated. And as singer-songwriter Regina Spektor says, 32’s just a god damn number. 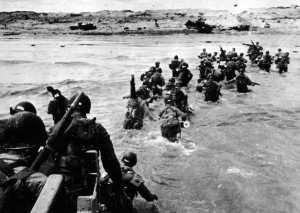 It has surprised many of my students over the years, whether they were old enough to be my parents or young enough to be my kids, that American military action the first year and a half of its involvement in World War II was in outlying Pacific islands and the deserts of North Africa. It wasn’t until the summer of 1943 did Allied troops reach the European mainland (several years Nazi territory by then), coming first through Sicily, then advancing north up the Italian peninsula. Progress was not exactly speedy (fascists are loath to give up ground), and it took nearly a year to reach the city of Rome. U.S. forces took possession of Rome on June 4, 1944, just two days before their fellow soldiers landed in France (one of history’s great one-two punches). Seventy years later it is this “D-Day” (the Allied invasion of Nazi-held France from across the English Channel) that is looked upon as one of if not the turning point of the war. It would be nearly a year and quite a number of battles later before victory in Europe was secure, and another three months beyond that before the Japanese would surrender in the Pacific. Mission accomplished.

Today I bring you this short military history in recognition of the anniversary of D-Day. As someone who never had to serve I am thankful of those who did. They ensured for us the freedom we know today.

I’ve said before that World War II was the last government program that worked. It was very expensive and at times inefficient (like most government programs), but in my opinion, worth the price. My generation owes a great debt to those of the Greatest Generation, those who served overseas and on the homefront, so let us remember them this day.

This past weekend my hometown of Binghamton, New York, lost a legend. Vincent Holmes was only 37, but had touched an incredible number of lives in his time, including mine. Vinny was a few years older than I was, one of the cool older guys who showed me adulthood when I had known little previously. Yeah, he probably made a few bad choices over the years, but we all did, and that was part of growing up.

I never met anyone who made friends as easily as Vinny. Quite simply, you wanted to be his friend. That can’t be taught. It’s trite to say, but Vinny really care what color you were, or whether you were a millionaire or a bum. He would be your friend just the same. And that meant that you became friends with millionaires and bums too, because Vinny rolled with them both.

Now what the bejesus am I supposed to do until Wednesday?